Orthopedics at the Hadassah Clinic: Center of New Technologies

Orthopedics at the Hadassah Clinic: Center of New Technologies

In 2014, Hadassah became the only medical facility in the Middle East due to the active introduction of new technologies that joined the prestigious International Society of Orthopedic Centers (ISOC). Doctors of clinics admitted to this organization are trained in the world-best orthopedic centers.

Dozens of spinal and joint surgeries annually performed in the clinic are recognized as unique, since some of them can be reproduced in a few medical centers of the world, while most are not available in any other Israeli hospital.

Specialists of the department have achieved great success in the treatment of intervertebral hernias, scoliosis, sports injuries and other diseases, brilliantly removal of  benign and malignant tumors, and correction of birth defects.

To learn more about the benefits of the Hadassah Clinic in orthopedics, please contact our staff.

Novelties of the Hadassah Department of Orthopedics 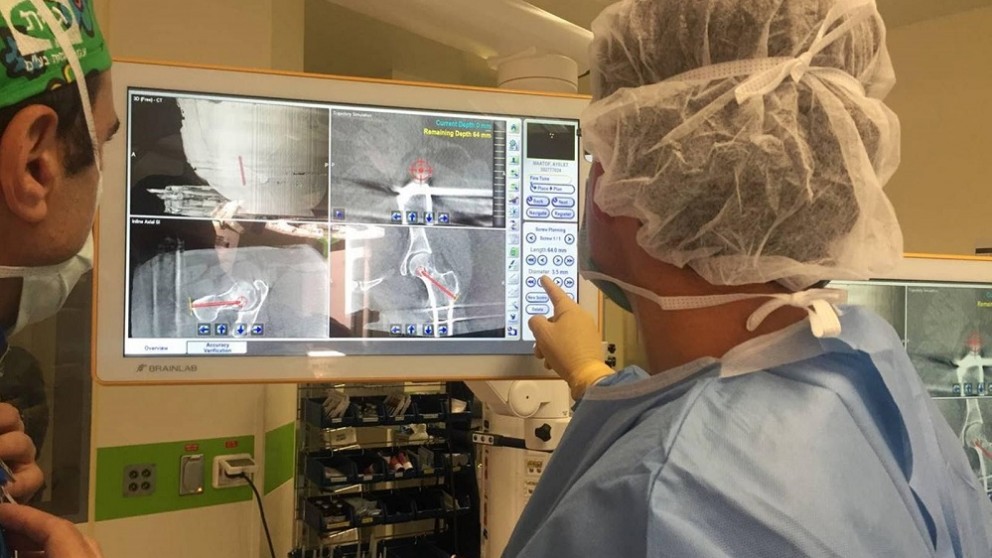 •In 2016, Hadassah became the first in Israel to use a combination of BRAINLAB's innovative navigation system and ZEEGO's advanced imaging device when removing hard-to-reach tumors. Only thanks to this, the orthopedists managed to replace the difficult and dangerous intervention with a minimally invasive operation when removing a benign femoral tumor in a 27-year-old female patient.

•Since 2013, Hadassah has been the first not only in Israel but also in Europe to use the innovative iAssist Knee orthopedic surgery device. The head of the orthopedic department, Professor Meir Liebergall, participated in the design and implementation of this device, released by the world's leading developer of orthopedic surgery equipment, Zimmer Holdings Inc. (USA).

•Hadassah is the only clinic in Israel and one of the few clinics in the world who, in June 2018, began to preserve limbs with antibiotic-resistant infections using innovative phagotherapy. The first patient was a resident of the country who had to amputate the leg, but the new technique caused the infection to disappear in a matter of days.

Hadassah offers its patients suffering from various pathologies of the musculoskeletal system the most prompt and reliable treatment: orthopedics in Israel are at a very high level, but the use of innovative equipment in the Jerusalem medical center has become one of the pillars of the activities of the orthopedic department.

The Renaissance unit creates a three-dimensional model of the spine, subjecting it to computer processing though only a few x-ray images, minimizing the radiation dose and allowing the surgeon to have complete control over the course of the operation, which makes it much more accurate and safer.

SpineAssist is the forerunner of Renaissance, the first and still current development of Mazor Robotics. It is used on hundreds of surgical interventions annually.

Artis Zeego - a robotic unit, one of the most advanced in the world. This is a navigator capable of creating three-dimensional images of body tissues in real time, so there is no need for a preoperative CT scan. During operation, the surgeon, guided by the images, can accurately perform the necessary micromanipulations, bypassing blood vessels and nerves.

Brainlab Spine Navigation is s a universal orthopedic surgery tool that uses both two- and three-dimensional images to enhance the accuracy of procedures.

iAssist Knee is an innovative bone-cutting device. The unit is equipped with a gyroscope like in an aircraft and a Wi-Fi device that connects the gyroscope to a computer, which makes the operation as accurate and bloodless as possible. This is far from the only innovative technology adapted for use in orthopedics, which is actively used now in Israel.

Most complex robotic spinal operations at the Hadassah Clinic are performed by world-famous specialist Dr. Josh Schroeder. The doctor was the first in the world to perform a robotic surgery to correct a severe spinal fracture using two innovative robots: Zeego robot navigator and Renaissance surgical robot.

To know more about innovative technologies of the Hadassah Clinic in orthopedics, please contact our staff.

This area of orthopedic surgery at the Hadassah Clinic is represented by a team led by Dr. Vladimir Goldman, head of the department of limb lengthening and deformity correction in children and adults. Dr. Goldman has worked in children's orthopedics in New York, being involved in correcting crooked legs, various deformations (lengthening, shortening of limbs, and other procedures) under the guidance of leading US orthopedists.

The doctor uses the most modern methods, such as the introduction of stem cells for pain relief. Cells are taken from the pelvis using a special centrifuge, isolating the layer with the maximum concentration of stem cells. This technology is used only in cases where the patient moves a lot.

In limb elongation, the doctor uses the computerized, self-adjusting hexapod - OrthoSpin, developed in Israel. The patient cannot change the settings, the doctor himself sets the necessary parameters in a special program. Its use prevents patients from making errors in the setting, resulting in improper bone fusion.

Another advanced technology used by the doctor in leg elongation is Stride - the latest model of magnetic nails developed in the USA. This is a bone-inserted structure that extends under the influence of induction created by a powerful magnet. This method of extension does not require invasive intervention and prevents possible complications. In Israel, Stride is currently used in Hadassah only. This technology ensures elongation of a limb by as much as 8 cm.

Before any intervention, Dr. Goldman's team plans the operation by examining a three-dimensional computer bone model, which is then printed on a 3D printer. 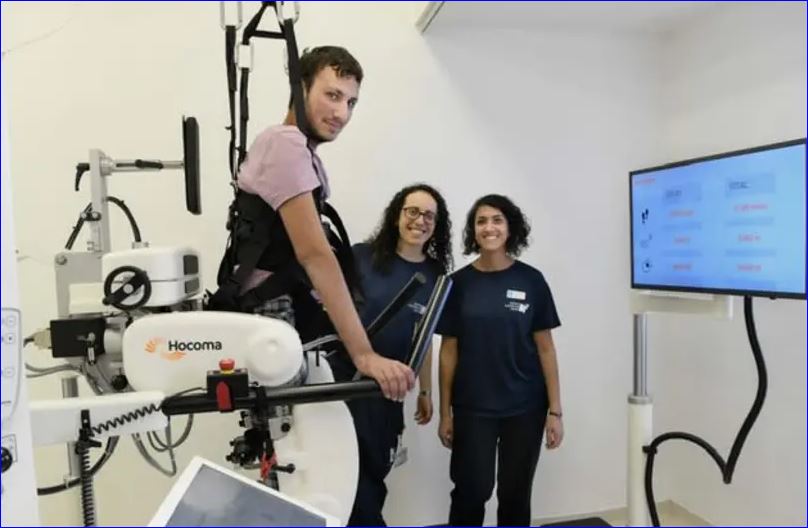 To restore patient’s mobility after orthopedic surgery, as well as during recovery from a serious injury or illness, Hadassah uses the latest Lokomat robotic simulator. This device helps the patient to imitate the natural functioning of the muscles during walking.

To engage and interest the patient in the training process, special video games are broadcasted on the display of the device. Obedient to the movements of the patient’s feet, the apparatus moves him through amazing virtual landscapes. Lokomat also records progress in training, allowing doctors to create an optimal rehabilitation program. Thanks to sensitive sensors, robotic support, and load regulation systems, Lokomat ensures much more efficient and faster recovery than other simulators.

Make an appointment for a consultation with one of the leading Israeli orthopedists or ask a question to our staff.